English US » Romanian   At the restaurant 3 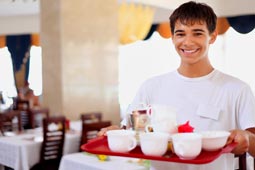 Successful speaking can be learnt!

Speaking is relatively easy. Successful speaking, on the other hand, is much more difficult. That is to say, how we say something is more important than that what we say. Various studies have shown this. Listeners subconsciously pay attention to certain characteristics of speakers. Thus, we can influence whether or not our speech will be well received. We just always have to pay close attention to how we speak. This applies to our body language as well. It must be authentic and fit with our personality. The voice also plays a role, because it is always assessed too. With men, for example, a deeper voice is advantageous. It makes the speaker appear confident and competent. On the other hand, a variation of voice has no effect.

Particularly important however, is speed when speaking. The success of conversations was examined in experiments. Successful speaking means being able to persuade others. He who wants to persuade others must not speak too quickly. Otherwise he gives the impression that he is not sincere. But speaking too slowly is also unfavorable. People who speak very slowly come across as unintelligent. Therefore, it's best to speak with average speed. 3.5 words per second is ideal. Pauses are also important in speaking. They make our speech more natural and believable. As a consequence, listeners trust us. 4 or 5 pauses per minute are ideal. So just try to control your speech better! Then let the next interview come…
Guess the language!
_______ is a North Germanic language. It is the native language of approximately 5 million people. The exceptional thing about _______ is that it consists of two standard forms: Bokmål and Nynorsk. That is to say, there are two recognized _______ languages. They are both used equally in administration, schools, and media. For a long time a standard language could not be established due to the country's size.

So the dialects remained and developed independent from one another. However, every _______ understands all local dialects as well as both official languages. There are no solid rules for _______ pronunciation. This is because both standard forms are predominantly written. Typically a local dialect is spoken. _______ is very similar to Danish and Swedish. Speakers of these languages can communicate amongst themselves relatively easily. _______ is a very interesting language. And you can choose which _______ you want to learn!