English UK » Czech   At the restaurant 4 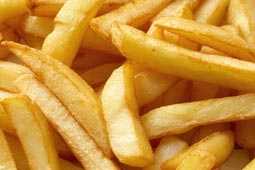 They are mother, hemp, horse and to rant. Interestingly, tonal languages also impact our hearing. Studies on absolute hearing have shown this. Absolute hearing is the ability to identify heard tones accurately. Absolute hearing occurs very rarely in Europe and North America. Fewer than 1 in 10,000 people have it. It's different with native speakers of Chinese. Here, 9 times as many people have this special ability. We all had absolute hearing when we were infants. We used it to learn to speak correctly. Unfortunately, most people lose it later on. The pitch of tones is also important in music. This is especially true for cultures that speak a tonal language. They must adhere to the melody very precisely. Otherwise a beautiful love song comes out as an absurd song!
Guess the language!
_______ is counted among the Indo-Iranian languages. It is spoken natively by 130 million people. The majority of those people live in Pakistan. However, it is also spoken in the Indian state of ******. _______ is hardly ever used as a written language in Pakistan. It is different in India because there the language holds an official status. _______ is written in its own script.

It also has a very long literary tradition. Texts have been found that are almost 1000 years old. _______ is also very interesting from a phonological point of view. This is because it is a tonal language. In tonal languages, the pitch of the accented syllable changes their meaning. In _______, the accented syllable can take on three different pitches. That is very unusual for Indo-European languages. That makes _______ that much more appealing!