English UK » esperanto   In the kitchen 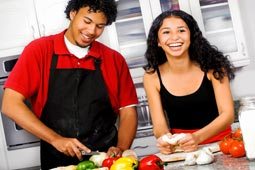 He also likes to learn using pictures, tables and flash cards. This type reads a lot and dreams often and in color. They learn best in a nice environment. The communicative type prefers conversations and discussions. They need interaction, or dialog with others. They ask a lot of questions in class and learn well in groups. The motoric type learns through movement. They prefer the method "learning by doing" and want to try everything. They like to be physically active or chew gum when studying. They don't like theories, but experiments. It's important to note that almost everyone is a mix of these types. So there is no one that represents a single type. That's why we learn best when we enlist all our sensory organs. Then our brain is activated in many ways and stores new content well. Read, discuss and listen to vocabulary! And then do sports afterwards!
Guess the language!
Indonesian is spoken by more than 160 million people. It is the native language of only 30 million, however. This is due to the fact that almost 500 different ethnic groups live in Indonesia. They speak 250 different languages that branch out into many dialects. Such a linguistic variety can naturally lead to problems. Today's Indonesian has thus been implemented as the standardized national language. It is taught in every school in addition to the native language.

Indonesian is counted among the Austronesian languages. It is so closely related to Malay that the two languages are considered almost identical. There are many advantages to learning Indonesian. The grammar rules are not very complicated. The orthography is also not difficult. You can base pronunciation on the spelling. Many Indonesian words come from other languages, which makes learning easier. And soon Indonesian will be one of the most important languages of the world!