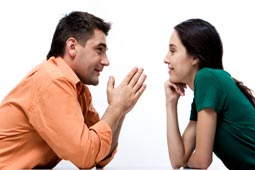 Each language is used for communication between people. When we speak, we express what we are thinking and feeling. In doing so, we don't always stick to the rules of our language. We use our own language, our vernacular. It's different in written language. Here, all the rules of our language are displayed. Writing is what enables a language to become a real language. It makes language visible. Through writing, thousands of years' worth of knowledge is passed on. This is why writing is the foundation of every sophisticated culture. The first form of writing was invented more than 5,000 years ago. It was the cuneiform writing of the Sumerians. It was carved into slabs of clay.

This cuneiform was used for three hundred years. The hieroglyphics of the ancient Egyptians existed for about as long. Countless scientists have devoted their studies to it. Hieroglyphics represent a relatively complicated writing system. However, it was probably invented for a very simple reason. The Egypt of that time was a vast kingdom with many inhabitants. Everyday life and above all the economic system needed to be organized. Taxes and accounting needed to be efficiently managed. For this, the ancient Egyptians developed their graphic characters. Alphabetic writing systems, on the other hand, go back to the Sumerians. Each writing system reveals a great deal about the people who use it. Furthermore, each country shows its own characteristics through its writing. Unfortunately, the art of handwriting is disappearing. Modern technology makes it almost superfluous. So: Don't just speak, keep writing too!
Guess the language!
_______ is a member of the Dravidian language family. These languages are primarily spoken in southern India. _______ is not related to the Indo-Aryan languages of northern India. Approximately 40 million people speak _______ as their native language. It is recognized as one of the 22 national languages of India. _______ is an agglutinating language. That means that grammatical functions are expressed by affixes.