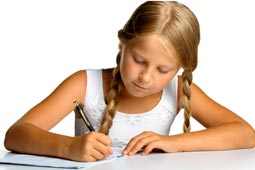 Children must also learn that language is valuable! However, they should always have fun in the process. Reading aloud to them shows children how exciting language can be. Parents should also do as much as possible with their child. When a child experiences many things, he wants to talk about them. Children growing up bilingual need firm rules. They have to know which language should be spoken with whom. This way their brain can learn to differentiate between the two languages. When children start going to school, their language changes. They learn a new colloquial language. Then it's important that the parents pay attention to how their child speaks. Studies show that the first language is stamped on the brain forever. What we learn as children accompanies us for the rest of our lives. He who learns his native language properly as a child will profit from it later. He learns new things faster and better – not only foreign languages…
Guess the language!
Lithuanian is counted among the Baltic languages. It is spoken by more than 3 million people. These people live in Lithuania, Belarus, and Poland. The only language it is closely related to is Latvian. Although Lithuania is a very small country, the language is divided into many dialects. Lithuanian is written in Latin letters, but it has a few special symbols. The many double vowels are typical.

There are also several varieties of vowels, such as short, long, and nasal. Lithuanian pronunciation is not difficult. The intonation is markedly more complicated because it is flexible. That is to say, it is based on the grammatical form of the word. It is interesting to note that Lithuanian is a very archaic language. It is considered the language that has strayed from its parent language the least. That means it is still very similar to the first Indo-European language. If you want to know how our ancestors spoke, you should learn Lithuanian.