English UK » Indonesian   At the airport 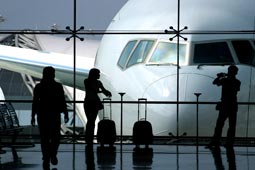 Those who work out often sculpt their bodies. But it is apparently possible to exercise one's brain too. That means more than talent is needed to learn a language. It is just as important to practice regularly. Because practice can positively influence structures in the brain. Of course, a special talent for languages is usually hereditary. Nevertheless, intensive exercise can change certain brain structures. The volume of the speech center increases. The nerve cells of people who practice a lot are also altered. It was long believed that the brain was unalterable. The belief was: What we don't learn as children, we'll never learn. Brain researchers, however, have come to a completely different conclusion. They were able to show that our brain remains agile for a lifetime.

You could say that it functions like a muscle. Therefore it can continue growing into old age. Every input is processed in the brain. But when the brain is exercised it processes inputs much better. That is to say, it works faster and more efficiently. This principle holds true for both young and old people equally. But it is not imperative that a person study in order to exercise his brain. Reading is also very good practice. Challenging literature especially promotes our speech center. This means that our vocabulary gets larger. Moreover, our feeling for language is improved. What is interesting is that not only the speech center processes language. The area that controls motor skills also processes new content. Therefore it is important to stimulate the whole brain as often as possible. So: Exercise your body AND your brain!
Guess the language!
_______ is counted among the Romance languages. It is closely related to Spanish and Catalan. It evolved from the Vulgar Latin of the Roman soldiers. European _______ is the native language of approximately 10 million people. It is also an important world language. This is due to ******al's colonial power in the past. The maritime nation took its language to other continents in the 15th and 16th century.